Van Gogh and Me

In 2005 I had the privilege of going to the MET in NYC and there saw quite a few Van Gogh's original paintings. At this time I had painted two Van Gogh's for Jeremy. They are below. Carrie, my daughter, decided she wanted this one called "First Steps", so as luck would have it this was on display at the MET. So I was able to see it in person and get detailed photos and accurate colors so that I could do it for her. In the photo below me with the original, is the painting that I did. The colors look different from the original, but that is the camera's fault. The colors are the same as the original that I am standing by here. So now, I have a commission to do a few more Van Gogh's. Jeremy wants some to hang in his new office. For those that don't know, Jeremy is my son who recently became a Nurse Practitioner and has a new office with bare walls. So we will see what we can do about that!
Below the photo of me are the four Van Gogh paintings that I have done so far, First Steps, Night Stars Over the Rhoan, and then one of his many Wheat Fields and Cyprus paintings. Also a version of Starry Night where I changed up the color scheme to reds and greens and this one belongs to Amy now. Below that are some teasers for your, Jeremy!! I'm working on it! Lots of strokes in that one!!
These painting are a lot of work. Van Gogh usually finished one in a day! Just a little tidbit - You can order copies of these from China for about $25 (The canvas that Jeremy just bought me was about $25!!) but I read that they have an assembly line and each person does a small area that they are very quick at, so each one is done pretty easily by multiple painters. But they are good nonetheless.  Just not special!!!

Watch this short: Vincent Video It is awesome! It is a clip from the TV show Dr. Who and one of his time travel adventures. 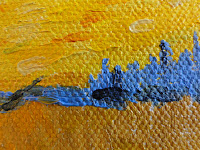 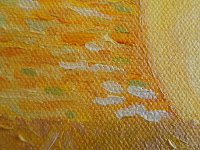 Jeremy, this one is something else to paint. Especially the field!!

SUBSCRIBE To My Blog and you will be notified when there is a new posting!

The images reproduced in this blog are copyrighted by the artist, Janet Paden. All rights reserved.©

If you are interested in purchasing a painting, or have any questions, please feel free to contact me at janetpaden@gmail.com
I accept PayPal or check for payment. If you are using a check, I will ship your painting after the check is cleared.
***NOTE: The Shipping Prices listed are for the CONTINENTAL U.S. ONLY. No international shipping at this time.
Please keep in mind that colors vary from monitor to monitor. I do try my best to present accurate colors on my photos.